Rising unemployment and high debt is expected to boost mortgage loan delinquencies in Canada, though experts say it won’t play out like the U.S. subprime mortgage crisis of 2008.

“I definitely feel like we’re not going to see the delinquency rates that we saw in the U.S. during the financial crisis. It’s not going to be anywhere near that,” explained Susan Hosterman, the senior director of North American RMBS and covered bonds, citing historically low delinquency rates in Canada, “So I don’t think we’ll see those levels with just how pro-active the banks are being with working with the borrowers.”

In 2008 U.S. household debt reduced dramatically. Obversely, these past few years had Canadians fuelling these debt loads even further, and it has prompted concerns that the country would face its own debt reckoning during COVID-19 with a surge in mortgage arrears and delinquencies.

The current financial environment does raise many red flags: the country lost over one million jobs last month and Canadians are finding it more challenging to keep up with bills. These challenges are exacerbated by burgeoning Canadian debt loads (with a household debt to personal disposable income ratio of 166.5 per cent by Q3 2019) that have long gone unaddressed.

This is the risk that will confront Canadian households during the recession and recovery, according to Craig Alexander, the partner and chief economist at Deloitte: “One of the great legacies of the current crisis is that after the pandemic has passed, we’re going to have more indebted households,” he explained. “So I think the issue around leverage isn’t going to go away, in fact, I think it will become more acute.” 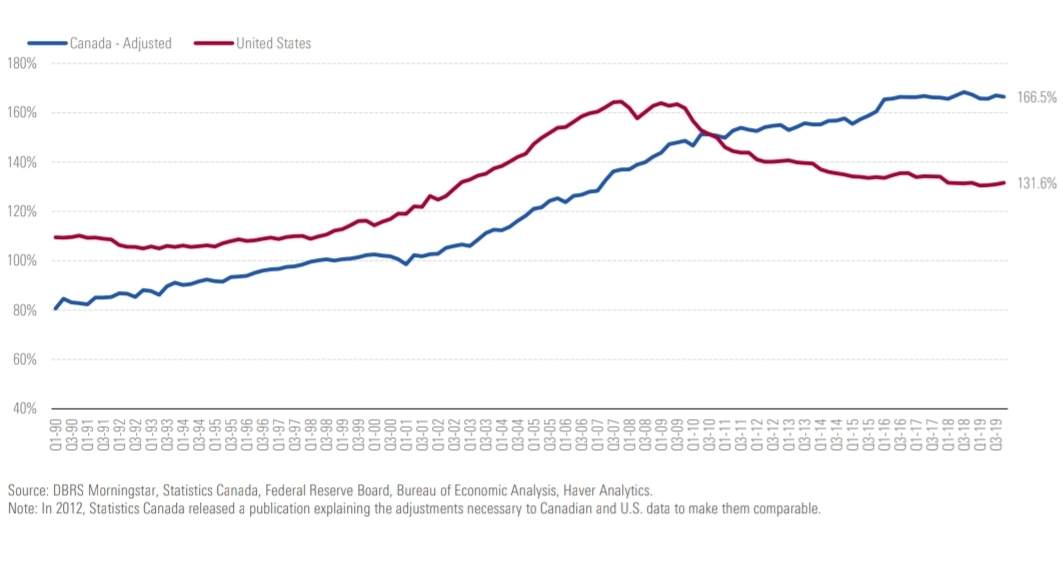 As the U.S. de-leveraged its debt after the recession in 2008-2009, Canadians fueled their households with higher debt loads. This high rate presents strong risks heading into the COVID-19 recession.

Even though Canadians shoulder high debt loads, they have a strong track record of keeping current with their mortgage payments. The rate of mortgage arrears in Canada stood at a fraction of a per cent for over ten years, most recently standing at 0.24 per cent as of October 2019, according to the Canadian Bankers Association. This rate floats along with the unemployment, a metric that saw a large jump in March to 7.8 per cent from 5.6 per cent.

Ben Rabidoux, president at North Cove Advisors, explained that the data already show some foreboding figures. “There’s early tentative credit card data coming in from credit card trust portfolios. And as expected, the arrears rates are starting to rise [and] the loss rates are starting to move up.” The severity of the losses will largely be determined by the duration of the economic lockdown along with the steepness of the recession.

There hasn’t been a playbook in economic history that can describe what mortgage market impact the current environment could have. “Really, nothing’s off the table right now so we don’t have any clue on how this is going to play out,” Rabidoux said.

All risks considered, analysts like Hosterman are confident that the Bank of Canada’s co-ordination with Canada’s five largest banks and the strong borrower-lender dynamics in Canada will mitigate the risks. Alexander agrees. “There’s a bunch of reasons to suspect that this will lead to more mortgage arrears and in some cases, more mortgage defaults,” he explained, “But it may not spike the way you think in line with the depth of the recession – and there’s a variety of reasons for that.”

The reasons included the mortgage deferral measures taken by the banks, and the market being dominated by prime mortgages (as opposed to the subprime mortgages in the U.S., many of which defaulted leading into the 2008 crisis). Canadians are more likely than Americans to have most of their loans in one bank. This means that banks have a strong incentive to working with their financially ailing customers to keep their patronage. “There’s an old adage about banks giving out umbrellas when it’s sunny and taking it away when it rains,” Alexander explained, “But the banking system in Canada has figured out that if you do that, you permanently lose customers. And so it’s in the bank’s interest to renegotiate the terms to show flexibility.”

This contrasts to how loans are organized in the U.S., with most Americans having their mortgage, auto loan, line of credit at different institutions. Another difference between Canada and the U.S. is that Canadians are much less likely to strategically default on a mortgage because of recourse laws, according to Hosterman and Alexander.

While it’s convenient to use the last recession as a point of comparison, Rabidoux cautioned against comparing an economic impact of this magnitude to the steep, swift recession of 2008 - particularly when it comes to the U.S. figures: “We draw this weird line in the sand in Canada and that’s been the narrative for ten years. ‘Well, if we’re not as bad as the U.S., then we’re fine.’ And to me, that’s just a bizarre way to think about it,” he explained.

There is a broad grey area between Canada’s historically low arrears rates and the 11.54 per cent peak rate the U.S. just after the crisis.

“There’s a lot of pain between here and there,” said Rabidoux, “We’re going to land somewhere on the pain spectrum.