Canadian Households With Budget Shortfalls Have 8 Weeks Of Funds Left

Canadian consumers are running out of cash, according to a Big Three credit agency. TransUnion’s latest household survey on October 4th, shows a rise in consumers who are seeing the shortfall to cover bills. The gap between what they can pay and payment obligations, is now surging higher. Despite the bad news, consumers now have a little extra savings to carry them, before running out of money.

About Today’s Numbers
Today we’re looking at the financial shortfall consumers face during the pandemic. The firm found 63% of consumers are concerned about their ability to pay bills. Of those, 65% of consumers could still pay for over a month. We’re only focusing on TransUnions insights on people with shortfalls. After all, if you could pay your bill – you didn’t have a shortfall.

Average Shortfall To Cover Bills Increases
Canadian consumers not able to pay their bills saw the average shortfall get larger. Much larger. TransUnion estimates an average of $921 per month in the latest survey. This is up 6.44% from the previous survey, conducted just over a month ago. It’s also the second highest shortfall observed since June 29, when it was just a dollar higher. Despite the larger shortfall, people have a longer runway before going broke. 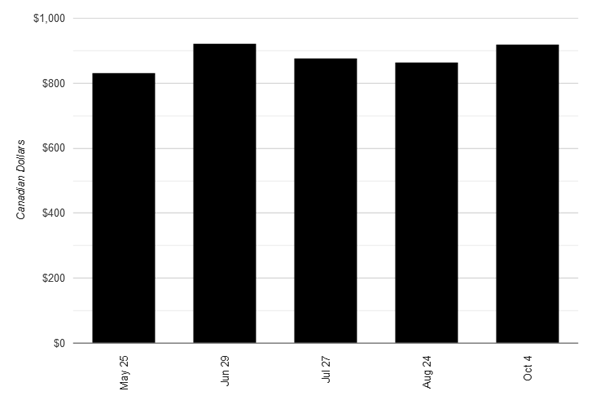 Consumers With A Shortfall Have 8 Weeks Left
The number of weeks before the shortfall turns into running out of money is longer. The latest survey shows consumers had an average of 8.2 weeks before facing an inability to pay. That’s a whole extra week compared to the last survey’s 7.2 weeks. Weeks left started to inch higher as full stimulus measures and supports were rolled out.

Canadian Consumer Average Payments Left
The number of weeks the average consumer experiencing a shortfall estimates they have left before running out of money. 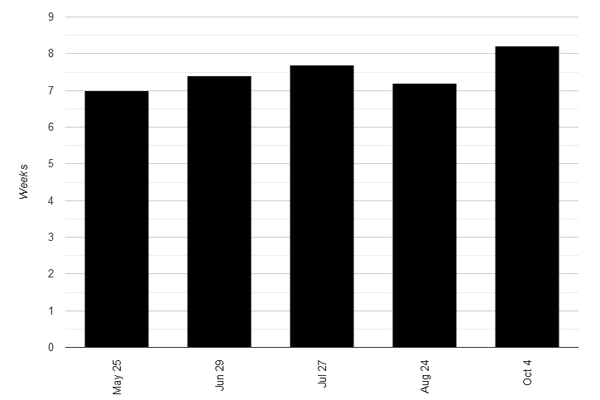 Canadian households are facing a larger shortfall, but have more weeks before running out of cash. This may seem contrary at first, but makes sense when you consider the overall picture. Payment deferrals and support measures sent the savings rate soaring. This likely allowed households facing a shortfall to stash a little extra money away. As payments resume, they have a longer runway before running out. The number of weeks only takes these households to December on average though.