Canadians Increasingly Stuck In The Economic Conditions They Were Born In: StatCan

The “Canadian dream” ― the ideal of improving your material well-being and giving your children a shot at a better life than you had ― is becoming harder to achieve, and the COVID-19 economic crisis could make things worse, new research suggests.

Canada hasn’t exactly developed a caste system just yet, but a new study from Statistics Canada shows it’s increasingly difficult to move up the economic ladder.

StatCan looked at the tax records of five “cohorts” of Canadians born between 1963 and 1982. They found that a person born in 1982 to parents in the bottom fifth of earners is 22 per cent more likely to stay at the bottom than someone born 19 years earlier, in 1963. They are also 8 per cent less likely to make it to the top fifth of earners than their predecessors.

Simply put, it’s getting harder to get richer in Canada, and slightly easier to stay well-off if you were born that way.

StatCan notes that this has taken place at the same time as an overall increase in income inequality, and the correlation between the two is so strong it’s unlikely to be a coincidence.

The agency released a chart of Canada’s “Great Gatsby Curve,” showing the correlation between a person’s income and their parent’s income. It shows people in more recent age cohorts have incomes that are more closely linked to their parents’ incomes. 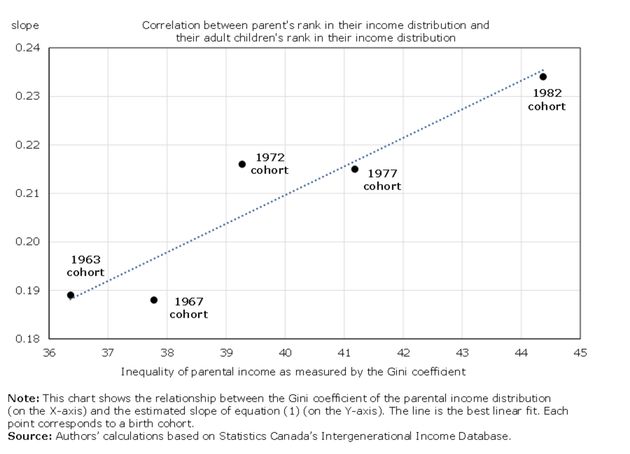 “Inequality is rising across all G7 countries ― not just between young and old, between generations, but between high skilled and low-skilled (workers),” said Sohaib Shahid, a senior economist at TD Bank.

Though he says there are many potential reasons for the growing gaps in advanced economies, one he highlights is central banks’ practice in recent years of buying up assets during economic crises. This drives up the prices of stocks, real estate and other assets, widening the gap between those who own these things and those who don’t, Shahid said.

Another issue is automation.

“Low income, low skilled labour is being replaced (through) automation, and the trend has been turbocharged by this pandemic,” Shahid told HuffPost Canada.

Progress ‘brought to a screeching halt’ by pandemic

The progress made in recent years on gender parity, economic inclusion for minorities and poverty reduction “has been brought to a screeching halt” by the pandemic, which saw women and minorities disproportionately affected by job losses that were concentrated in low-wage service-sector businesses, the report said.

Not only is this growing gap a risk to the economy going forward, but “an increase in jobless youth in a world of rising inequalities could be a recipe for social unrest, political polarization and populism,” Shahid warned in the report.

Governments “need to urgently go on a war footing” to tackle inequality before its negative effects manifest themselves anymore than they have in this pandemic, Shahid said.

Whatever policies governments choose, Shahid urges they follow three points: Help should be targeted to the groups seeing the greatest need; it should not be pulled away “prematurely,” or there will be a rise in bankruptcies and unemployment; and vaccination programs should be sped up.

“The quicker (people) get back on their feet and back to work, the quicker we can recover,” he said.