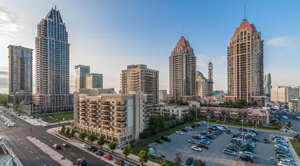 It is going to work out to approximately $147 for property taxes for each homeowner.

This week the City of Mississauga began its budget deliberations in council chambers. Staff presented a proposed tax increase of 5.9 per cent on the city’s portion (34 per cent) of the property tax bill. When blended with the Region of Peel (45 per cent) and the province (21 per cent), the overall tax impact on residents is a 2.98 per cent increase on next year’s property taxes.

Last year, the city’s portion of the property tax bill increased by 4.9 per cent. Coupled with the region and province, that amounted to an overall tax hike of 2.5 per cent.

In addition to the proposed property tax hike, the Region of Peel has proposed a five per cent increase in the utility rate that would see the average household water bill go up $33 to $622 a year (based on average consumption of 290,000 litres.

If the proposed budget is approved by council, City of Mississauga’s unionized employees could receive a 1.75 to two per cent pay bump and non-union employees, 1.5 per cent.

Transit also got a financial boost from the federal government, with a $58.3 million contribution to be matched by the city.

Budget deliberations will continue on Dec. 6, 7 and 12th.